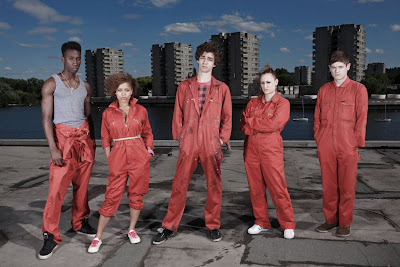 How to talk about England without mentioning the production of British serie like The Inbetweeners, Downton Abbey, Shameless or Misfits. Unfortunately, we don't see that much British series in France because of their format (i.e., 6 episodes by season). The French are used to the American format and like to see regularly new episodes.


I particularly like Misfits and that's why I am going to dedicate this  article to the series. It is about a group of young offenders doing community service get struck by lightning during a storm, and begin to develop superpowers.

This series is just offbeat and crazy! With a lot of humour and a touch of fantastic, the show is an explosive mix that will let you stuck in front of your screen. However, there is quite a few inconsistencies in the script so if you like stories to be well put together, you might don't like the show. But after all, you laugh so much and you become attached so quickly to the characters that it won't bother you.

Finally, every episode is full of great music! I've been checking the episode soundtracks on the Internet more than once. In a few words, I would just you recommend you to try to watch one episode. I'm pretty sure you will become addicts at once!